Oakland at Houston. In quite possibly the least anticipated game of the weekend we get a team void of their leader/QB/MVP candidate in Derek Carr and another with no good option at QB after spending millions on Brock Osweiler in the offseason. Both teams have good options to get the ball to and capable defenses with star power willing to stop the points from piling. But which team really has the edge?

Connor Cook looked good in what really just amounted to garbage time play, but he couldn’t have been much worse than Matt McGloin. Brock Osweiler somehow got the nod over Tom Savage and Lamar Miller is coming back, but the offensive line really needs to pull it together. Can Osweiler wake up and get the ball to DeAndre Hopkins like Savage was able to do? And can young pass rushers Jadeveon Clowney or Khalil Mack make a bigger impression? The Texans lost a closer one the first time around when the Raiders were healthy. Texans 20, Raiders 17

Detroit at Seattle. Before Earl Thomas was on his way to retirement, it seemed as though the Seahawks were well on their way towards making a run to the Super Bowl. Now they seem like an afterthought in a matchup of teams with glaring weaknesses. Can Matthew Stafford continue his magic and spread the ball evenly enough to account for a lack of talent at the RB position?

The run defense is stout for the Lions and though the Seahawks have struggled with the run game they will still pound with Russell Wilson and Thomas Rawls some to keep Detroit honest. Seattle doesn’t want to make this a high-scoring affair but they have proven that they can hang when necessary.  On the flip side, the Lions have been fighting odds stack against them the entire year and have done so admirably. It will take a herculean effort from the defensive secondary to keep up with guys like Tyler Lockett and Doug Baldwin as well as the physical style of Jimmy Graham. Seahawks 31, Lions 27 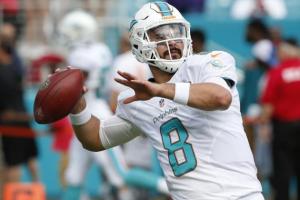 Miami at Pittsburgh. Was it addition by subtraction for the Dolphins when Ryan Tannehill went down with the ACL injury that is keeping him out of this game? Matt Moore isn’t as flashy or as athletic, but his presence seems rather steady and he doesn’t tend to make as many mistakes/costly turnovers. We’ve seen Jarvis Landry come back to life while having less 2 yard routes to run. And while Jay Ajayi won’t be featured as much with the impressive run defense that Pittsburgh has, there’s no doubt Miami will find ways to get him the ball.

The Steelers have sort of sputtered into the playoffs despite winning their division. Ben Roethlisberger, Antonio Brown, and Le’Veon Bell have been nothing short of remarkable the last three quarters of the season and they should continue on that trajectory in this one. Even with Cameron Wake, Mario Williams, and Ndamukong Suh making things tough for the Steelers improving offensive line, it will be tough to stay in front of Pittsburgh. Quick routes by slot receivers taking advantage of a missing Reshad Jones will be the name of the game in a game that shouldn’t be close. Pittsburgh 34, Dolphins 17

NYG at Green Bay. This very well could be the best game of the postseason, forget the weekend. I know that sounds ridiculous. But each of these teams has every bit of a chance to run the table based on their recent run. The Giants have the Cowboys’ number if they were to get that far and the Packers have Aaron Rodgers (which is all you need). And with Jordy Nelson playing big and the other fast receivers lining up this should be fun to watch.

Even at full strength, the Packers haven’t been a good defense. Clay Matthews and Julius Peppers continue to lead this group, but there’s just no one is the defensive secondary playing at a high level. And even then, it would take something special to slow down the kind of run that the trio of Odell Beckham Jr., Sterling Shepherd, and Victor Cruz have been on. It doesn’t hurt that the Giants’ running game has been improving and Paul Perkins looks to continue maturing as a safety valve for Eli Manning. Giants 28, Packers 23