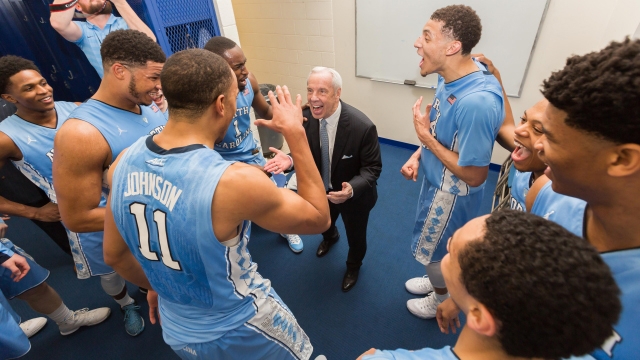 #2 Villanova vs. #1 North Carolina. After a couple years of being a #1 seed and failing early, Villanova has finally made the kind of run through the last part of the season that many thought was possible. Great defense and great overall team play have given a team without a household name to precipice of a National Championship.

As if North Carolina needed any more pressure, they’ve got a looming NCAA investigation to think about as soon as the final whistle is blown. Naturally, Roy Williams is thinking about any sanctions as a possibility because he’s the head coach for a blue-blood program and nothing will ever happen to them, right?

Well, we’ve got some great guard play from Ryan Arcidiacono (and at times, Jalen Brunson) and then the midrange prowess of both Josh Hart and Kris Jenkins. The Wildcats can play fast but won’t want to do that at every opportunity. One thing they must keep in check is three point attempts. While their shooting was so efficient against Oklahoma it didn’t matter where they shot it from, it would be nice to keep the long shots under a third or so of their overall attempts.

Carolina doesn’t need anything from their guard play to win. They need to protect the ball, but they don’t need much playmaking or points. The front line of Brice Johnson and Kennedy Meeks have been very good lately and should be again. If they can limit guys like Hart and Booth and Bridges on the wings, then guys like Justin Jackson and Theo Pinson don’t need to light it up from deep.

If both teams play their best then this could be a shootout. Each team has senior leadership at the point and down low. There’s also young talent on the wings on both squads. The difference will come down to which team can dominate in the low post (whether it’s UNC with their bigs or Nova with their dribble penetration) and get some separation from the perimeter. North Carolina 82, Villanova 77.