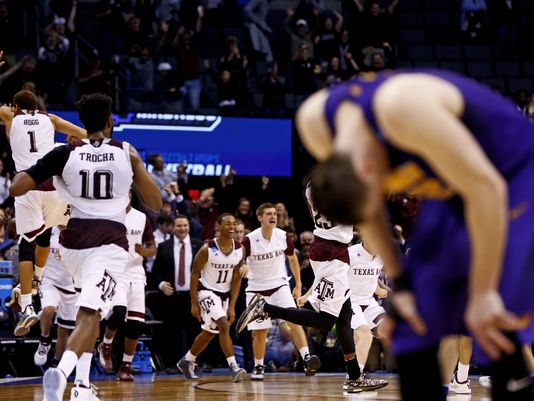 For some reason this year’s NCAA Tournament has followed a particular script: Team A has sizable and/or consistent lead throughout game. Then Team B comes out of nowhere and wins. So there have totally been a few blowouts by high seeds and also by surprise teams, but most games have been tight and there was reason to suspect that much would take place.

But no one thought Texas A & M would come back the way they did against Northern Iowa or that Notre Dame would play solid defense and overcome Stephen F. Austin in the final moments or that Wisconsin would jump on Bronson Koenig’s back after Xavier seemed to be running away with the game. And those were only a handful of the late-game heroics that made this last weekend, and the first week as a whole, one of the most entertaining in the history of the tournament.

At this present point in time we are looking at bracket that is only missing two #2s, two #3s, and two #4s. And if you saw the names of the programs in those slots (i.e. Syracuse, Gonzaga, Wisconsin, Notre Dame, Indiana, and Maryland) you wouldn’t necessarily think much of upsets per se. And this is probably more due to a really bad job of seeding/the most unpredictable field in recent memory. So while we get geared up for Sweet 16 matchups, we should keep in mind that this isn’t unprecedented but it is very exciting.

One thought on “Last-Second Glory”