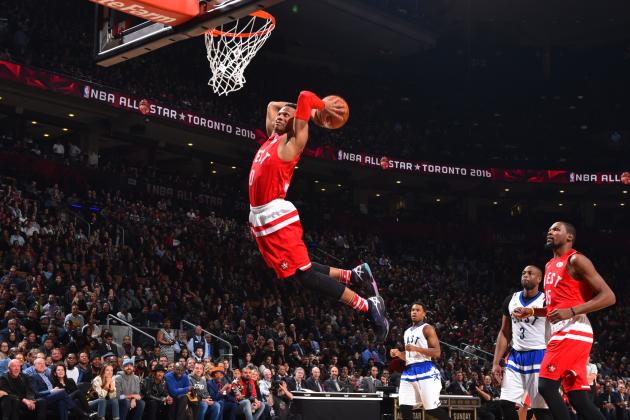 If there’s one thing that NBA All-Star Weekend showed us it’s that the Dunk Contest is the feature attraction. The 3-point contest is pretty interesting, too. But the NBA is all about athleticism and creativity and that’s what we see when these guys dunk all over the place.

Another thing that can be taken from the weekend is that the NBA must have wanted Zach LaVine to win the Dunk Contest because he didn’t win on his own. Perhaps he had the single-most awesome dunk but not collectively (and even that is up for debate). Aaron Gordon was everything we’d been hearing about since he first arrived at Arizona a few years ago.

On top of all that, the All-Star game itself was no fun. Not that these kinds of games are ever that great, but it certainly wasn’t made any better with the high scoring and endless attempts at trying to toss the ball to themselves off the backboard. It’s time to get Rock N’ Jock back together. Give these guys 50 point shots because they are going to shoot from deep every time anyways.  Take points away if you can. Or just take away the game altogether and give these dudes a rest.

Take the reins from what the NFL is doing and get a 3-on-3 tournament going so we can see Stephen Curry ISO and break down Kobe Bryant. Let it be playground rules and throw in some And-1 Mixtape dudes to make shit interesting. Because this year definitely wasn’t.