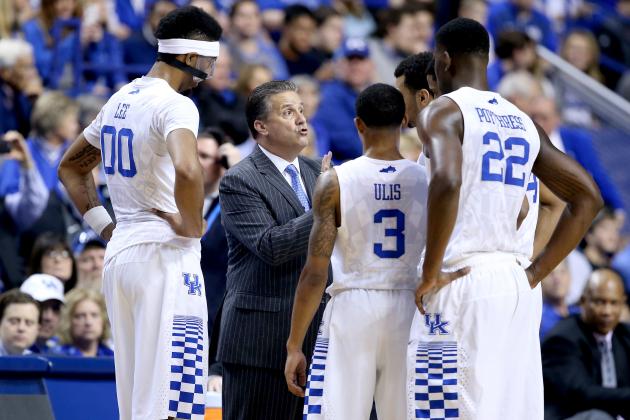 While there’s no clear-cut #1 team in the country, there’s been a dominating program in the SEC for the past few years and it really hasn’t been close. Kentucky brought in another great class and there was a lot expected.

Skal Labissierre has been a disappointment. Whether the dude is a lottery pick in the NBA this summer or not, he’s got a lot of work to do. And the back court that everything expected to be good has taken a long time to get their shit together. But it’s happening now.

And still, somehow LSU is tied for first even though their season has been mediocre at best. There’s tons of talent in Baton Rouge beyond Ben Simmons and Johnny Jones still can’t get that much out of this group.

Add to that a team in Texas A & M that has had a really bad slide recently that might taken them nearly out of the Top 25 after being as high as 5th in the country. And a Vanderbilt squad that has had a few injuries but should be way better than 15-10 on the season.

Simply put, there’s just too much talent in the SEC not to have more quality teams. In a year that might have provided some surprises, instead teams underwhelmed at best. But things can’t and likely won’t stay down beyond this year. Next year’s recruiting classes are very good for Kentucky and Mississippi State. And Alabama and Auburn continue to improve with their new coaches. Kentucky should take this regular season title on account that LSU is unpredictable AND they have the regular season finale with the Tigers at home just in case. But anyone can win the conference tournament.