In this recap of the fantasy season from the 2014 NFL season, I am going to review some of the surprises, failures, and give some advice for 2015 drafts. Everyone felt the effects of injuries, a change in philosophy, or the various rifts that screwed over fantasy owners. Some drafts won and lost us leagues. Others merely set us up for the definite need to be as crafty as humanly possible.

Whether you were in a standard league or PPR league (or a stupid IDP league), figuring out the right drafting strategy has been changing each and every year. This year more than any other, drafting a quarterback before the 5th round was a bad idea. Drew Brees decided not to show up at all. And the rest of his team never really found any consistency from the receivers, even if you wanted to buy into Jimmy Graham trying to pass himself off as anything other than a tight end. But back to quarterbacks, Peyton Manning had his moments and both Andrew Luck and Aaron Rodgers went earlier and earlier. Luck wasn’t going before the 4th round in many drafts, but the other guys were all taken by the 2nd round.

This season saw many surprise QBs as well as some old names who weren’t expected to do too much. One such unsuspected big-time performer has been and continues to be Ben Roethlisberger. How many times did you see him going before the 10th round? Probably less often than he went undrafted. And Eli Manning can definitely thank Odell Beckham (who will be a 2nd round talent next year) for his relevance this year. Ryan Tannehill finally had a good year and it was due in part to an ability to get into the endzone on the ground, much like a top scorer who everyone knew and no one wanted to take, Russell Wilson. The next four guys were owned in almost every league possible and yet were hitting home runs or completely striking out (Tony Romo, Tom Brady, Matt Ryan, and Philip Rivers). Nearly everyone else was owned here and there and disappointed (save Cam Newton who totally disappointed except in spots).

The quickest group to review has gotten be tight ends. Graham obviously had his shortcomings even after he got back to 100% healthy. Antonio Gates continued to produce as a #1 option for Rivers and the Chargers, even though he was only a good TE starter the latter half of the season. At least he wasn’t as bad as Jason Witten. Several different TEs had solid if not unspectacular performances but never really wowed anyone (i.e. Greg Olsen, Martellus Bennett, and Delanie Walker-when he got targets). Missing from seasons past were big names like Jordan Cameron and Dennis Pitta, who had injuries to blame. If guys like Coby Fleener, Travis Kelce, and Zach Ertz put more than a couple of games together then bright things could come in the future. And then there was also the group of players that were routinely projected for tons of points and had maybe one or two decent games all season (Jared Cook, Charles Clay, Owen Daniels).

Wide receiver is a tricky position in fantasy when you have loaded teams. Past one or two tight ends, you were likely filling out rosters around the 10th or 11th rounds if not later. But these guys were worth the 1st round pick in PPR leagues and 2nd round picks in standard leagues. Antonio Brown was a bit of a runaway, but Demauryius Thomas wasn’t that far off considering Emmanuel Sanders had a load of targets and the Broncos slowed their passing attack as the season progressed. The Pack Attack of Jordy Nelson and Randall Cobb was also a dynamic duo. With the late surge by the aforementioned Beckham, Dez Bryant, and Julio Jones. If not for a late-season slump, Jeremy Maclin would’ve been towards the top of the rankings as well. Another such player that shit the bed at the end (the last two weeks especially) was TY Hilton. Yeah, he had an injury in Week 16, but he also had a measly 3 targets in Week 17. If DeSean Jackson can stay healthy, his big-play ability can make a difference. 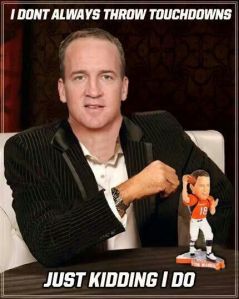 There were tons of surprises as well as flops this season even though many of us continued to start them. Among the surprises were Brandon LaFell, who stepped up where Danny Amendola couldn’t. Mike Evans became the top threat for the lowly Bucs. Golden Tate had a strong season filling in for Calvin Johnson– who was average through the injuries. Another guy who stepped up this year was DeAndre Hopkins who had a slightly more productive season than Andre Johnson, even though there was no consistency at QB. Jordan Matthews also stepped up as a solid option with so many different guys to go to. Leading the disappointments was Kelvin Benjamin who is only a rookie and made several rookie mistakes. Too many drops in the endzone just really hurt fantasy owners. Torrey Smith finished with 11 touchdowns but only had 49 catches despite a new wrinkle in the offense with Steve Smith (who was great for a month then disappeared). AJ Green was injured a lot, but he wasn’t great when healthy. Mike Wallace found the endzone 10 times but didn’t do much else and was inconsistent as hell. Another guy who has fallen off the map is Marques Colston. How were there not any really good seasons in that Saints passing game?

Finally, we have the running backs. If you learned anything this season; it’s that no matter the type of league you play in, you can’t win without a few good backs. Whether you pick them up off the waiver wire or are lucky enough to have a great draft, you have to get depth at the RB position. This season was tough for those who took Adrian Peterson or really believed that Ray Rice might come back (and thus took him in the 5th round or so). There were teases like Montee Ball going as early as the 2nd round regularly. You wanted to believe that CJ Spiller would stay healthy (not that he played well anyways). And Andre Ellington? Wow, did I wiff on that one. The O-line is terrible in Arizona but Ellington couldn’t do much of anything when he got the ball.

There were tons of options off the waiver wire due to injuries on the Colts, Chargers, Giants, Texans, and Chiefs. CJ Anderson was an awesome guy to come out of pretty much nowhere but at least he only took the job from Ball then Hillman. In an even better season (and I hated him for it), Jeremy Hill jumped Giovanni Bernard on the depth chart. Bernard was supposed to be a stud. He might still be one. Craziness. We saw a great seasons from Justin Forsett, Lamar Miller, and even Mark Ingram, but somehow one-trick ponies Alfred Morris and Frank Gore still had good seasons even though neither of them is used too often in pass-blocking schemes. And EVERYONE said that last season’s carries would doom Marshawn Lynch and looked what happened!

Then you have old faithfuls LeSean McCoy, Matt Forte, Jamaal Charles, and Eddie Lacy. Arian Foster was stellar despite an injury-riddled season. But it was the big years by DeMarco Murray and Le’Veon Bell that were so impressive. Bell will be a top 5 pick next year at this rate. And how about those surprise guys that might not be great after this year but did well for themselves? Branden Oliver, Tre Mason, Denard Robinson, Alfred Blue, and anyone that didn’t suck for the Browns (West and Crowell). It was definitely an interesting season.